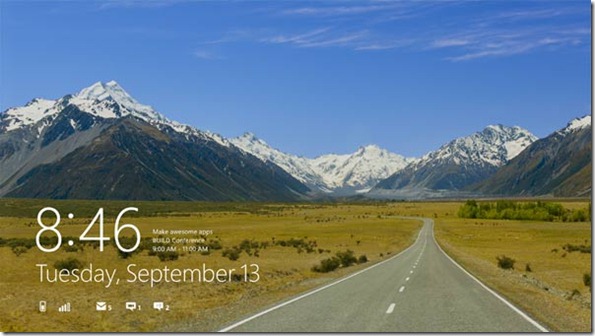 The new lock screen – So far so good.

I have played with the Developer Preview that was released last year in time for the “Build” conference. I installed it first on my HP laptop and my initial reaction was “OMFG!”, everything that the development of Windows to date was thrown out and it appeared MS had fallen “hook line and sinker” for the tablet paradigm basically because Apple did it with the iPad and had sold millions of the the things in a few days. Trying to run the Developer Preview with a mouse and keyboard was just horrific. 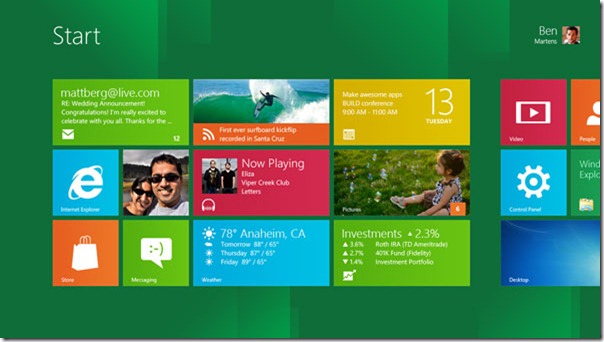 The new big tile interface seen above is called “Metro” and it is a direct port of the operating system used in Windows Phone 7.  Basically it is designed to be operated with your fingers rather than a mouse, so everything is big and easy to poke with your finger.

I and a lot of others ranted about it on the “Building Windows 8” blog in the comments, my biggest annoyances are:

In fact I can’t see why there is this need to make all of Microsoft’s products have this corporate “Metro” look.  They have even put it on my Xbox 360 and it works Ok but it’s not needed for my money. I think they could quite happily have Windows Tablet Edition and Windows Desktop Edition and leave Metro off desktop PCs all together.

My hope is that when the full beta comes out they have answered a lot of the criticisms I have here such as making it possible to close Metro apps and being able to turn the Metro Interface off for desktop users and give us the Start Menu back.

As a person who makes his living writing applications for Windows and supporting business users PCs and Servers I am extremely worried as to how Business will react to this complete sea change in the user interface.  I think if Microsoft are not careful they are going to have another “Millennium” or “Vista” on their hands. Just as they managed to give the vast majority of Windows XP users a viable alternative to their current operating system.

I am very concerned that a lot of businesses who traditionally wait for a couple of generations of Windows operating systems before upgrading and who are now about to shift off Windows XP as it reaches its final support countdown in 2014 will take a look at this and think “I really don’t want the training costs associated with this transition” and will jump ship completely to the likes of Linux Mint. Mint offers them a no cost alternative desktop that has all of the benefits of Windows 7, i.e. it looks like traditional Windows, it doesn’t suffer with Viruses at the moment, it runs Open Office or Libre Office which can open MS format documents and provide enough functionality for most businesses.  The server Linux offerings like Red Hat can provide a similar set of email and collaboration applications that would almost satisfy the current Outlook/Exchange user. Also increasingly the Google Android market will satisfy the tablet and mobile phone areas and these are Linux based technologies so in some ways sit better with Linux than Windows.

If this starts to happen with a number of very big players, then the majority of business users might decide to follow suit and MS will be dead literally.

Let’s hope they see sense and accommodate the desktop and laptop user who doesn’t want to poke their screen(s) with their finger and do want to do serious work that requires a keyboard and mouse or we will all be honing our Linux skills.